Sofia Gonzalez, 9, a fourth-grade student at Colonel Santos Benavides Elementary is the daughter of Juan Manuel Gonzalez Jr. and Rochelle Valdez de Gonzalez. Sofia is a member of the Volleyball Performance Academy, and competed in BGC TAFF Volleyball Invitational for the past three years. Sofia is actively involved in school assisting with the collection of goods for the needy and veterans. Her volunteer work includes participation in the Princess Pocahontas Pageant, cleaning up parks and animal shelters and helping at Bethany House with Project Cupcake. In addition, Sofia enjoys spending time with her family and friends as well as helping at her grandparent’s bakery. Her hobbies include dancing, volleyball and gymnastics.

Sofia’s older sister, Isabella Gonzalez, was an Abrazo Child in 2014. Her mother was Pocahontas in 1994 and a member of the Council since 1998 where her brother Roberto and sister Denise were presented in 1990 and 1998 respectively. Rochelle has served on the WBCA Board since 2006. Sofia’s grandmother, Cordelia de la Chica Valdez was President of Princess Pocahontas Council in 1997-1999. Her grandfather, Roberto Valdez served as President of Lulac #12 in 2014-2016.

Liam Anderson Haynes, 7, is a second grader at St. Augustine Elementary School. He is the son of Christopher M. Haynes and Erika Garcia Haynes. Liam is an “A” Honor Roll Student and has been on school’s basketball team for past 2 years as well as plays golf and tennis. When he is not in the field, Liam also enjoys swimming, dancing, fishing, hunting, 4-wheeling and going to the ranch with family and friends. Liam is also a classic car and modern car enthusiast who enjoys attending local and out of town car shows with his father.

His family’s involvement in the Washington’s Birthday Celebration spans three generations. Liam’s father has been a WBCA volunteer since 2002 and a WBCA Board Member since 2014. His mother has been a WBCA and IGNC member since 2014 and has choreographed the Abrazo Children presentation since 2011. Erika was U.S. Abrazo Child in 1985. Liam’s grandfather, Richard E. “Dicky” Haynes, Sr. portrayed George Washington in 2005. Liam was preceded in the honor of serving as an Abrazo Child by his cousins Mercurio Martinez IV in 1997, Luis Emmanuel Guajardo in 2001 and Katarina Garcia in 2011.

Yvette, 9, attends the fourth grade at Mary Help of Christians School and is the daughter of Jose Eduardo Garcia and Yvette Bazan de Garcia. Yvette has shown an interest in community service since a very early age, including bake sales, helping out the Mary Help of Christians missions, and organizing a yearly posada at Casa Douglas, an orphanage in Nuevo Laredo. She is a proud member of Nueva Evangelizacion del Tercer Milenio, a Catholic organization focusing on spiritual growth and community service. At the academic level, she has participated in the UIL poetry contest and is a top honor student, consistently receiving high marks for her dedication to her school work.

She participates in flags and streamers, painting and playing the piano. She enjoys building legos, reading, making slime and spending time with her family and friends. She is known for being well organized and gives all her effort in everything she puts her mind to. Vanessa Sanchez Bazan, Yvette´s aunt, was the Abrazo child in 1986 representing Mexico as well. Yvette´s mother was presented as a debutante in the society of Martha Washington in 1993. Yvette’s parents have been members of WBCA and IGNC since 2012.

Tomas, 9, a fourth grade student at United Day School, is the son of Ramon Enrique Villegas Moreno and Nicole Tomko Villegas. At school Tomas is in student council and basketball and also enjoys swimming, golf, video games and playing his drums. He enjoys playing game boards and is an avid Pokémon card collector and enthusiast. Tomas is active in cross fit and in Taekwondo since first grade. However, his true passion is basketball. When he is not playing with his team or shooting hoops at home, he is watching live games or replays of his favorite team the San Antonio Spurs.

His parents have been involved with the CIBV since 2010. His father, Ramon E. Villegas Moreno, participated as Miguel Hidalgo at the International Bridge Ceremony in 2016, while his mother, Nicole Tomko Villegas, represented United High School in the Princess Pocahontas Pageant in 1991. Tomas comes from a family of charros beginning with his great grandfather and his grandfather Ramon B. Villegas was one of the founders of the Charros Association in Nuevo Laredo. It is a great honor for Tomas to put on a traje de charro with the botonadura that has been in the family for four generations. 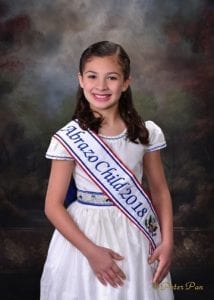 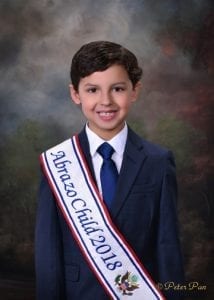 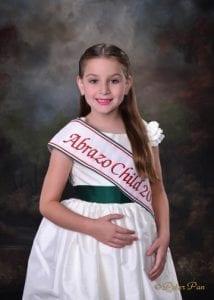 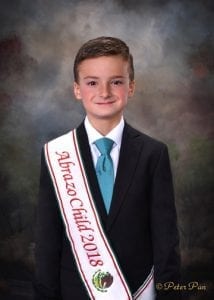